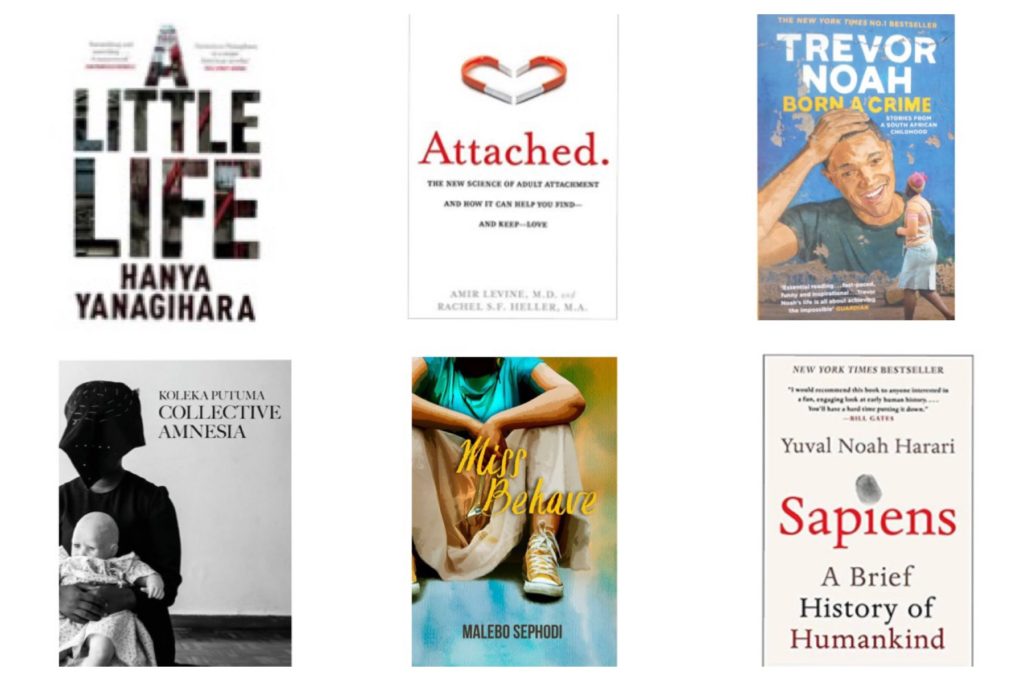 There is no such thing as a bad book. There are certainly books that we have never finished – some were intellectual torture to read, others were grammatical nightmares, while some have never made it in life because no one speaks about them. Besides, we have different tastes in literature – something that blows one mind away might be flat for someone else. Something else that means absolutely nothing to someone else might be the book that changed someone else’s life.

When asked which books made the year 2018 among a cohort of friends, these books came up. It must be safe then to expect that these are definitely not bad reads. I’ve personally read four of the six and they were worth my time. What’s most exciting in this first part of the list is that half of them are by South African authors.

Perhaps you have read one or few of them, in which case we would love your input in the comments section below.

Introducing part I of II of the good reads of our time – written here with an excerpt from their respective publisher to give you an idea of what they are about:

“When four classmates from a small Massachusetts college move to New York to make their way, they’re broke, adrift, and buoyed only by their friendship and ambition. There is kind, handsome Willem, an aspiring actor; JB, a quick-witted, sometimes cruel Brooklyn-born painter seeking entry to the art world; Malcolm, a frustrated architect at a prominent firm; and withdrawn, brilliant, enigmatic Jude, who serves as their center of gravity. Over the decades, their relationships deepen and darken, tinged by addiction, success, and pride. Yet their greatest challenge, each comes to realize, is Jude himself, by midlife a terrifyingly talented litigator yet an increasingly broken man, his mind and body scarred by an unspeakable childhood, and haunted by what he fears is a degree of trauma that he’ll not only be unable to overcome—but that will define his life forever.”

“…Discover how an understanding of adult attachment—the most advanced relationship science in existence today—can help us find and sustain love. Pioneered by psychologist John Bowlby in the 1950s, the field of attachment posits that each of us behaves in relationships in one of three distinct ways:  Anxious people are often preoccupied with their relationships and tend to worry about their partner’s ability to love them back. Avoidant people equate intimacy with a loss of independence and constantly try to minimize closeness. Secure people feel comfortable with intimacy and are usually warm and loving.

Attached guides readers in determining what attachment style they and their mate (or potential mate) follow, offering a road map for building stronger, more fulfilling connections with the people they love.”

“…Born a Crime is the story of a mischievous young boy who grows into a restless young man as he struggles to find himself in a world where he was never supposed to exist. It is also the story of that young man’s relationship with his fearless, rebellious, and fervently religious mother—his teammate, a woman determined to save her son from the cycle of poverty, violence, and abuse that would ultimately threaten her own life.

The stories collected here are by turns hilarious, dramatic, and deeply affecting. Whether subsisting on caterpillars for dinner during hard times, being thrown from a moving car during an attempted kidnapping, or just trying to survive the life-and-death pitfalls of dating in high school, Trevor illuminates his curious world with an incisive wit and unflinching honesty. His stories weave together to form a moving and searingly funny portrait of a boy making his way through a damaged world in a dangerous time, armed only with a keen sense of humor and a mother’s unconventional, unconditional love.”

“This highly-anticipated debut collection from one of the country’s most acclaimed young voices marks a massive shift in South African poetry. Koleka Putuma’s exploration of blackness, womxnhood and history in Collective Amnesia is fearless and unwavering. Her incendiary poems demand justice, insist on visibility and offer healing. In them, Putuma explodes the idea of authority in various spaces – academia, religion, politics, relationships – to ask what has been learnt and what must be unlearnt. Through grief and memory, pain and joy, sex and self-care, Collective Amnesia is a powerful appraisal, reminder and revelation of all that has been forgotten and ignored, both in South African society, and within ourselves.”

“Upon encountering historian Laurel Thatcher Ulrich’s quote, ‘well-behaved women seldom make history’, Malebo Sephodi knew that she was tired of everyone else having a say on who and what she should be. Appropriating this quote, Malebo boldly renounces societal expectations placed on her as a black woman and shares her journey towards misbehavior. According to Malebo, it is the norm for a black woman to live in a society that prescribes what it means to be a well-behaved woman. Acting like this prescribed woman equals good behavior. But what happens when a black woman decides to live her own life and becomes her own form of who she wants to be? She is often seen as misbehaving. Miss-Behave challenges society’s deep-seated beliefs about what it means to be an obedient woman. In this book, Malebo tracks her journey on a path towards achieving total autonomy and self-determinism. Miss-Behave will challenge, rattle and occasionally cause you to scream ‘yassss, yassss, yassss’ at various intervals”

“Most books about the history of humanity pursue either a historical or a biological approach, but Dr. Yuval Noah Harari breaks the mold with this highly original book that begins about 70,000 years ago with the appearance of modern cognition. From examining the role evolving humans have played in the global ecosystem to charting the rise of empires, Sapiens integrates history and science to reconsider accepted narratives, connect past developments with contemporary concerns, and examine specific events within the context of larger ideas.

Dr. Harari also compels us to look ahead, because over the last few decades humans have begun to bend laws of natural selection that have governed life for the past four billion years. We are acquiring the ability to design not only the world around us, but also ourselves. Where is this leading us, and what do we want to become?

2 thoughts on “Twelve Good Reads of Our Time, part 1”